Reflexology is the massage of the reflex zones of your feet or hands. These reflex zones are connected to the organs in your body and special body zones.
This technique was also used by the ancient Egyptians. Hieroglyphic evidence was found in the tomb of the physician Ankmahor, 2500 BCE.
With MF Reflexology I am working with my hands and my Tuning Forks, the weighted OM & weighted 528 combined with crystal energy (garnet, carnelian, citrine, rose quartz and amethyst), on the Reflexes of the feet or hands massaging or activating these reflex zones to facilitate health and wellbeing.

Reflex Zones on the Feet 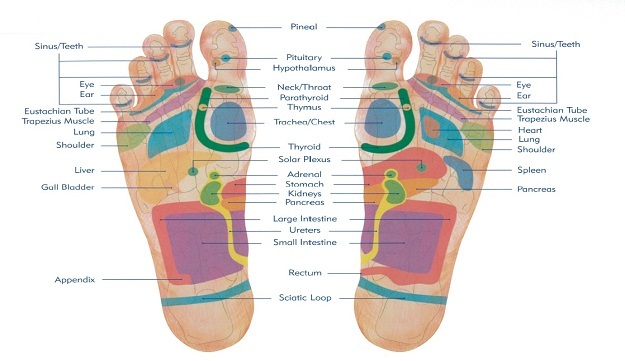 This technique of massaging or applying pressure to special zones on the feet is believed to be over 5000 years old. It was use by Indian and Chinese people for their wellbeing and than forgotten. In America it was used by the native American tribes long before Dr Fitzgerald published his book 'Zone Therapy'.
Eunice Ingham's learned about the zone therapy and developed this technique further into Ingham's massage. After reading Eunice Ingham's book ' Stories the Feet can Tell' Hanne Marquardt learned this form of pressure massage on the feet from Eunice. She practiced it from 1958 to 1967 in her own practice.and founded the school for Reflex Zone Therapy in Germany. From here it was developed further.
It is today known as Reflex Zone Therapy or Reflexology and can be applied to the feet as well as to the hands. 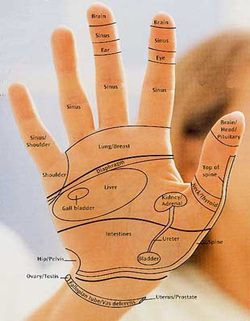